I previously discussed the merits of disk encryption as a countermeasure against the physical theft of portable computers and the leakage of private and confidential records that could ensue. But Full Disk Encryption is just scratching the surface of what can be done; the concept can and should be extended to all types of storage media, including portable media. I am currently using TrueCrypt‘s encrypted file-container volume capabilities to create encrypted CD-R’s and USB memory sticks both as part of my own regular secure backup and data vaulting operations and in the implementation of secure backup and data portability solutions for my customers.

Why encrypt a CD? Well, think of it this way: You take a good deal of trouble to protect the data on your computer from disclosure, using access controls like login passwords, software countermeasures to protect against infection and intrusion, maybe you have even followed my advice and implemented Full Disk Encryption. Suppose, though, that you then burn some important documents (lets say financial, tax, or customer records or the blueprints to a sensitive project) from your carefully protected computer to a plain old data CD. You place it on your desk, or in a spindle in a drawer, or in your car, or in a box to take to the post office. Later, when you’re not looking, a bad guy snatches this CD and makes off with it. Just like that, he has unrestricted access to its contents without ever having to defeat any defenses. This is a wide open security gap.

Encrypted CDs close this gap in an airtight way. They are effective against the risk of general theft from the premises, the risk of interception in transport, the risk of disclosure to an untrusted agent in a bailment situation as when data vaulting, the risk of corporate espionage, jealous lovers, the IRS, you name it. Whoever snags it will be the proud new owner of a nice pile of random data that, unless they have 5,000 years and a supercomputer, is totally opaque to them.

Secure portable storage media may even be required for regulatory compliance in many contexts, as when storing sensitive customer data such as Social Security Numbers, credit card numbers, or health records. Data breaches in military, public, and commercial sectors have increasingly been making headlines. Regulatory authorities in Nevada and Massachusetts just passed laws requiring the mandatory encryption of Social Security numbers, bank account numbers, and credit card numbers when carried on portable storage devices like flash drives, setting a precedent that will likely see legislation nationwide.

How to make an encrypted CD

The gist of the procedure is to create an encrypted file-container volume with TrueCrypt that is just slightly less than the size of the target media. I use a 695MB .tc container filesize for a 700MB CD-R. (You could choose a similar container filesize for a 4.7GB single layer DVD-R or 8.5GB dual layer DVD-R). The extra margin of 5MB is used to add some AutoRun machinery to the CD so that when the finished disk is inserted, Windows shell takes you right into password entry for mounting the encapsulated volume. 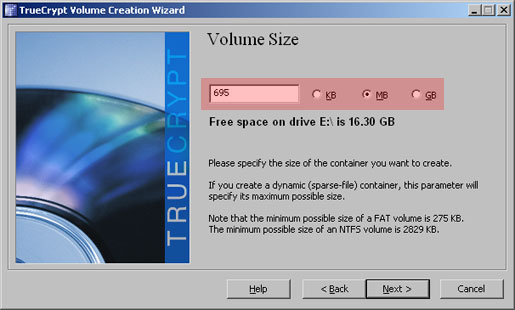 2. Mount the file-container volume and copy your content into it

3. For a convenient and elegant touch, use TrueCrypt’s Traveler Disk Setup utility to generate some AutoRun machinery that will start automatically when the finished disk is inserted 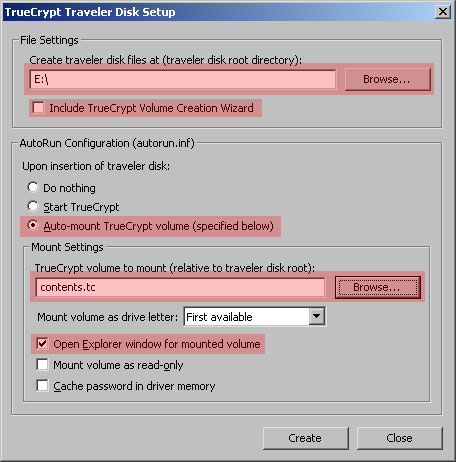 Upon insertion to a computer with AutoPlay enabled, this CD should now prompt you for the password, mount the encrypted volume automatically to an available drive letter, and open an Explorer window to that drive. And because its runtime components are packaged on the disk, it will work even on a machine that doesn’t have TrueCrypt natively installed.

Many security conscious users (myself included) disable AutoPlay because it poses something of a security risk; in this case, you can still mount contents.tc the long way, using TrueCrypt’s main dialog, you just sacrifice some convenience.

The developers of TrueCrypt have remarked that they plan to add support for Raw CD/DVD volumes in a future release, which ought to further simplify this procedure.

Stay tuned to this space for Part 2: Encrypted USB Memory Sticks, where I plan to share a very useful nested AutoRun technique.