AES is the Advanced Encryption Standard, the open, powerful encryption cipher officially sanctioned by the Federal government in 2001 for the encryption of top secret information. It has since become so ubiquitous that, as of this year, chip maker Intel has begun burning the logic underlying AES right on to new chips in hard-wired, transistorized form, allowing encryption and decryption duties to be offloaded from software applications for increased security, reliability and performance.

AES is also the fastest of three ciphers supported by TrueCrypt and the default cipher when creating new volumes. With version 7.0 the TrueCrypt development team has made good on their longstanding promise of a future release that would leverage hardware-accelerated AES capabilities when present. 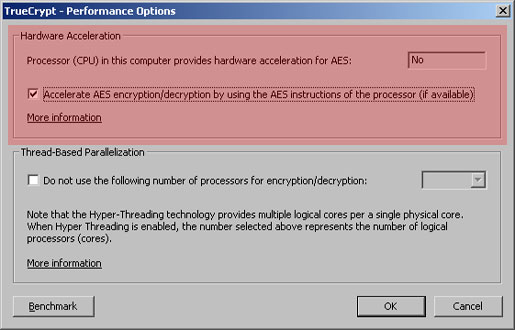 The new version also sports a variety of other usability, technical, and security improvements, including a number of convenience features involving Favorite Volumes (a feature I seldom use personally), and hardening of Hibernation File encryption under Windows Vista and 7 in the case that Full Disk Encryption is not in force (which is an ill-chosen configuration anyway). And, support for native volume encryption of floppy disks is dropped, presumably since no one has even seen a working floppy disk in years.

As the major version number increment suggests, this update is highly recommended for all users running previous versions. I’ve updated three systems here at the lab from version 6.3a without issue, although sadly, none of the three have new enough CPUs to do hardware-accelerated AES.

The authors dropped a lot more detail in the release notes this time, which is highly appreciated.

If you don’t already have Full Disk Encryption on your portable laptop / notebook / netbook computers, this fresh release presents an excellent opportunity to get serious about data theft prevention and fortify your security posture. I offer full service TrueCrypt Full Disk Encryption installation for those who are most comfortable having an expert perform the procedure using streamlined tools. Contact me for information.